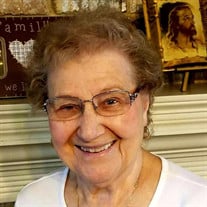 A memorial Mass will be celebrated on Wednesday, January 19, 2022, at 2:00 at Our Lady of the Lake Catholic Church in Rockwall, Texas for Genevieve Jeanne Marie St.Clair, 83, who passed away on Wednesday, December 29, 2021. Reception afterward at Harry Meyers Community Center in Rockwall. Jenny, as her family and friends knew her, was born July 9, 1938, in Sannois, France. As a young child, her parents moved to Nancy, France where she graduated high school. After graduation, she got a job working at the Army base in Toul, France, and worked there till she met her soul mate Paul St.Clair. They married in 1957 and were married for 64 years. After moving back to the states they settled in Dallas. Jenny was a homemaker when her 4 sons were young but also worked part-time for Avon as a sales rep for 50 years. Later she went to work at Skyline High School in Dallas as Coordinator of Audio/Visual Aids for 25 years. Jenny was a very giving, caring woman. Once retired she was active and volunteered in several community groups at the Rockwall Senior Center including knitting hats and blankets for hospitals. She was well-known at the local Kroger, securing donated food for the elderly and needy. She formed lasting friendships with a group of 12 ladies in a PoKeNo group that met once a month for 34 years. She was also part of a French Social group of 15 ladies for 30 years. She is preceded in death by her parents Andre' & Marie Durand and her son Michael St.Clair. She is survived by her husband Paul St.Clair Sr., three sons Paul Jr., wife Connie; Douglas, wife Kelli; & Philip St.Clair. Four grandchildren, Julie Cella, husband Mark; Marylin Feuebacher, husband Trent; Mason, wife Elizabeth; Merideth St.Clair. Two step-grandchildren Aimee Edwards, Andy, wife Samantha. Two great-grandchildren Carolina Cella, Dean St.Clair. In lieu of flowers please honor Jenny with a donation to the Pancreatic Cancer Organization at pancan.org.

A memorial Mass will be celebrated on Wednesday, January 19, 2022, at 2:00 at Our Lady of the Lake Catholic Church in Rockwall, Texas for Genevieve Jeanne Marie St.Clair, 83, who passed away on Wednesday, December 29, 2021. Reception afterward... View Obituary & Service Information

The family of Genevieve "Jenny" Jeanne Marie St. Clair created this Life Tributes page to make it easy to share your memories.

A memorial Mass will be celebrated on Wednesday, January 19,...