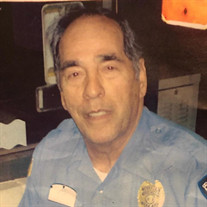 Genaro Garza, age 81, a Mesquite, TX, resident, passed from this life August 21, 2021. Genaro was born September 19, 1939, in Robstown, TX, to Pedro and Concepcion Garza. Genaro had an incredible work ethic that started when he was school-aged, working to help support his family. Most of his life he held more than one job. As an adult, he worked at Texas Poultry and Pilgrim’s Pride. He was self-employed, owning “Nallo’s Bar” and “El Club Imperial” nightclubs, earning the nickname, “Mayor of Harwood Street.” He started an aluminum and metal recycling business, too. He spent the last 20 years as part of the Security Team at The Forum at Park Lane - Senior Living Community. He had long-term relationships with the staff and residents. Genaro was an active, busy, man on the go, still working and never retiring. He loved playing baseball his whole life, playing catch and teaching his son, grandsons and great- grandson how to throw, catch and bat. He liked giving his loved ones nicknames, watching westerns, singing cowboys, Ford Mustangs and singing, in both English and Spanish, his favorite country, Mexican and Elvis songs to family. He would travel near and far for his kids, grandkids and great-grandkids, delivering them to and from school, home and games. Genaro not only cared for his family, but also befriended and watched over several homeless friends for years. He made sure they were fed and had shelter when needed. His family will remember him as a provider whose door was always open. Genaro leaves behind to cherish his memory his spouse: Micaela Lara; son: Dan Garza; daughters: Julie Villarreal, Bonnie Castillo and husband Eric, and Lorena Ramirez; stepson: Onorio Espinoza; son-in-law: Fidencio Villarreal; grandchildren: Rachel, Jonathan, Anthony Sr., Joshua Sr., Christopher, Brian, Jovan and Alinah; great-grandchildren: Joshua Jr., Natalie and Anthony Jr.; siblings: Herlinda, Tony and Lelo; and a host of nieces and nephews. Genaro was preceded in death by his parents: Pedro and Concepcion Garza; and siblings: Adam, Pepe, Robert, Rudy and Mary. Memorial services are pending.

Genaro Garza, age 81, a Mesquite, TX, resident, passed from this life August 21, 2021. Genaro was born September 19, 1939, in Robstown, TX, to Pedro and Concepcion Garza. Genaro had an incredible work ethic that started when he was school-aged,... View Obituary & Service Information

The family of Genaro Garza created this Life Tributes page to make it easy to share your memories.

Genaro Garza, age 81, a Mesquite, TX, resident, passed from this...