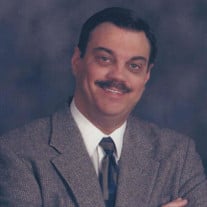 Gary Patrick Wood, 59, of Springfield, Illinois died Friday, April 29, 2022, at Kindred Hospital in Dallas, Texas. Gary was born September 20, 1962, in Peoria, Illinois to Hugh W. and Margaret Bolt Wood. Gary fell and experienced head trauma when he was 12 months old, resulting in epilepsy and seizures throughout his life. Gary attended Peoria schools until 6th grade when his family moved to Springfield, Illinois. He was in the first learning disability class in Peoria but was in mainstream classrooms in Springfield until his graduation in 1982, where he studied data entry during his final year in high school. After graduation, Gary eventually obtained a data entry job with the State of Illinois where he worked for 28 years until his retirement in 2021. Gary was a member of Peace Lutheran Church and formerly Faith Lutheran Church in Springfield, Illinois for many years. He was an avid Chicago Cubs fan and enjoyed watching baseball every day with his dad. Gary loved board games of all kinds and was always happy to play whenever asked. He especially loved Yahtzee, Scrabble, and chess. In his younger years, he also enjoyed bowling and playing miniature golf with friends. He had a great sense of humor, was brought easily to laughter, and watched comedies whenever he could. Gary also loved family pets over the years, especially Puffy and Nugget. For several years, Gary suffered increasing degrees of liver failure. Treatment eventually resulted in Gary receiving a liver transplant in 2020 at the Liver Institute in Dallas, Texas. The surgery was successful but anti-rejection drugs weakened his immune system. In January 2022, Gary was diagnosed with the Covid virus and pneumonia. Despite valiant efforts for weeks in ICU and continued hospitalization, Gary succumbed to his illness April 29, 2022. Gary is survived by his mother, Margaret A. (Bolt) Wood of Dallas Texas; his brother Alan V. Wood and Alan’s wife Renee D. Wood and their two children Zoe N. Wood and Braeden A. Wood of Waukee, Iowa; his sister Barbara L. (Wood) Figarelli and her husband Joe A. Figarelli and their two children Sophia N. Figarelli and Joseph A. Figarelli of Rowlett, Texas. He is also survived by his uncle Gerald Leon Bolt of London Mills, Illinois, aunt Alice Bolt Curless of Washington, Illinois, aunt Judy Wood Herr of Livermore, California, and numerous cousins around the world. Gary was preceded in death by his father, Hugh Williford Wood in June 2020, his grandmother Geraldine Finley Bolt, grandfather Obed Leroy Bolt, grandmother Velma G. Wood, grandfather Alva V. Wood, and grandmother Sena W. Wood. He was also preceded in death by uncles Warren Wayne Bolt and Philip Brian Bolt. Funeral service to be held at Resthaven Funeral Home in Rockwall, Texas at 3pm Thursday, May 5, 2022. In lieu of flowers, memorials may be sent to Peace Lutheran Church, 2800 W. Jefferson St. in Springfield, Illinois 62702. The service will also be live streamed, please go to https://view.oneroomstreaming.com/authorise.php?k=1651606740181976

The family of Gary Patrick Wood created this Life Tributes page to make it easy to share your memories.