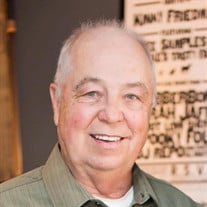 Francis Clifford “Cliff” Cozzolino, a dedicated father, son, brother, and loving husband passed the 25th of October 2021, at the age of 70. Cliff was born in Queens, New York on the 26th day of July 1951 to Frank and Irmgard "Kitty" Cozzolino. He was the first of two children, with younger sister Belinda Reilly. The family lived in Lindenhurst, New York where Cliff grew up. As a child, he dreamed of being a truck driver and was always lovingly teasing his sister and making her laugh. Cliff was an exuberant and charismatic young man who loved making new friends and was always dreaming and musing about the future. While in high school, Cliff met his future wife, Nancy. One afternoon, Cliff borrowed his mother’s Thunderbird and was driving a group of friends around. Nancy was a passenger in the backseat. She caught Cliff’s eyes in the rearview mirror, and they swiftly fell in love. The two were high school sweethearts and dated until they married several years later in 1974. After Cliff graduated from Lindenhurst High School in 1969, he enlisted in the Navy Reserves and shortly thereafter landed a job at Texas Instrument. His experience and connections ultimately led Cliff to a job with NEC where he would begin a long, successful career. Through his employer, Cliff discovered his love of Japanese culture and food. Not only did this discovery enrich his career, but it also enriched his life and became a passion that he would later share with those he loved. Cliff’s charisma and kindness toward others helped him establish professional relationships that were founded on mutual respect and fondness. His thoughtful candor and hard work eventually earned him the position of Vice President of Operations at NEC. His success prompted a move from New York to Dallas, and his family settled in Highland Village, Texas. After working at NEC for 25+ years, Cliff left the corporate world in search of a new beginning. He found a new home at Denton County Transit Authority where, true to form, Cliff swiftly made many friends. While at the Transit Authority, Cliff was able to fulfill his childhood dream of being a truck driver. Cliff made deliveries all over the metroplex and was delighted by all the people he was able to meet. Cliff considered his greatest accomplishment raising his four children with Nancy. He always enjoyed spending time with family and he particularly loved long cross-country road trips that allowed him to spend quality time with his kids. He also appreciated the simple moments and was often his happiest in his backyard or by the pool with his kids. After Cliff’s children were grown, he easily fell into the role of grandfather and excitedly embraced this chapter of his life. His grandchildren fondly called him ‘Packa’ and loved him for his joyful personality and his goofy dad jokes. Building relationships and making deep connections with friends played a significant role in Cliff’s life. Cliff never knew a stranger, and all who crossed his path would describe him as neighborly, infectious, and thoughtful. He was an impressive conversationalist, and his comedic skills endeared him to all. He always lit up a room and left an indelible impression on all he met. The respect, friendships, and intimacy that Cliff could build with others can best be explained through his love of Japanese food. At his favorite sushi restaurant, Cliff was greeted with a genuine, full-body smile from the owner. Though the owner was elated to see Cliff, he refused to seat him and his son because they didn’t have his favorite dishes available that day. The owner felt so much affection and respect for Cliff, he only wanted to give him his best. Many people shared this opinion of Cliff, and he walked through life making others feel appreciated, respected and cared for. Cliff is survived by his loving wife, Nancy Teresa Cozzolino of 47 years, their four children, son Cliff Cozzolino and wife Jenny, daughter Melissa Puckett and husband Tim, son Paul Cozzolino and wife Jodi, and Katie Cozzolino, 5 grandchildren, sister Belinda Reilly, niece Melanie Reilly and his mother Irmgard “Kitty” Cozzolino. He is preceded in death by his father Frank Robert Cozzolino. His family invites you to a celebration of his life on Sunday, November 14 from 3:30pm - 7:30pm at: Mill Street House 322 N Mill Street Lewisville, TX 75057 Please join us to celebrate Cliff’s life. Please bring your own story to share.

The family of Francis "Cliff" Clifford Cozzolino created this Life Tributes page to make it easy to share your memories.