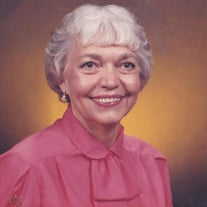 Evelyn Irene Ridsdale passed away peacefully on January 27, 2022, surrounded by her loved ones at her home in Rowlett, TX. She was 87, born May 30, 1934, in a log cabin in Parkview, NM, to Graden and Ethel (Chambers) Hall. Evelyn was a faithful member of First Rowlett United Methodist Church since 1973. Her strong faith guided her throughout her life. She began school in Parkview, being taught by her aunt. She grew up in New Mexico, living in Arch, Ennis and Portales. She graduated high school second in a class of twelve, in Grady, New Mexico. Evelyn met the love of her life, Lynn Ridsdale, in 1955 at the New Mexico State Fair. They attended First United Methodist Church together, and were involved in the Wesley Club, where they became square dance partners. When she returned from visiting her family in Bovina, Lynn made sure he was the one to pick her up from the bus stop, and received a kiss for his kindness. They were married June 23, 1956. Evelyn and Lynn started their marriage in Albuquerque, New Mexico. Lynn was stationed at Sandia Base, where Evelyn became a secretary. Their daughter Cheryl was born in December 1959, and their son Greg soon followed in November 1961. They moved out of Albuquerque up into the mountains nearby in Cedar Crest. They helped found Mountainside United Methodist Church, fostering a close-knit spiritual community. In 1972 they left New Mexico for the Dallas area, and found a home in Rowlett, where they became members of First Rowlett United Methodist Church. Evelyn made their home in Rowlett as special and full of love as their home in the mountains. Once her children were teenagers, Evelyn returned to work as a claims processor at Travelers Insurance, where she advanced to a management position through her creative incentives in motivating her employees. After 16 years at Travelers, Evelyn retired in time to go to Austin to help after the birth of her youngest grandchild. Following her retirement, she had more time to devote to her hobbies and volunteering. Evelyn was an excellent seamstress since her youth. While growing up she made her own clothes and those for her siblings as well as her wedding dress. As a young mother, she enjoyed making clothes for her daughter. After retirement, Evelyn developed her quilting skills and began crafting intricate quilts with her quilting group from church. They spent many hours together sharing their love of quilting and making quilts for the fall festival. Evelyn's grandchildren cherish the unique quilts she made for them that are tailored to their interests and styles. She enjoyed making over 1,000 teddy bears for children at Lake Point Hospital and recruited other volunteers to join her in this project and others for the hospital. Evelyn’s optimistic outlook saw the good in everyone and every situation. She focused on helping others and being grateful despite her health troubles later in life. She was a loving wife, mother, grandmother, sister, aunt, friend, and devout Christian. Her sweet presence will be deeply missed by her family and friends. Evelyn is survived by her loving husband: R. Lynn Ridsdale; daughter: Cheryl Swafford and husband Clark; son: Greg Ridsdale and wife Donna; grandchildren: Jeffrey Swafford, Christine Johnson and husband Kyle, Mitchell Ridsdale; siblings: Verna Lee Burnett and husband Lenard, Delbert Hall and wife Sherry, Jack Hall and wife Linda; numerous nieces and nephews. Memorial Services will be held at 11:00am on Wednesday, February 2, 2022 at First United Methodist Church Rowlett, 4405 Main St., Rowlett, TX 75088.

Evelyn Irene Ridsdale passed away peacefully on January 27, 2022, surrounded by her loved ones at her home in Rowlett, TX. She was 87, born May 30, 1934, in a log cabin in Parkview, NM, to Graden and Ethel (Chambers) Hall. Evelyn was a faithful... View Obituary & Service Information

The family of Evelyn Irene Ridsdale created this Life Tributes page to make it easy to share your memories.