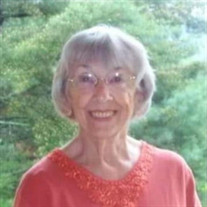 Esther Sue (Reed) Wakeley, age 88, formerly of Cullowhee NC, passed away peacefully at home in Rockwall, Texas, surrounded by family on the evening of May 3rd, 2021. Sue was the youngest daughter of the late Dr. Horace Reed and Francis (Cooper) Reed of Dover, Ohio. Sue was born at home on October 20, 1932, and was delivered by her Father, Dr. Reed. Her life was filled with music beginning as a young child and continued throughout her life. She loved to sing and would also become an accomplished pianist, also with the guitar and cello. Sue was Valedictorian at Dover High School and graduated with Honors from the College of Wooster in Ohio with a Bachelor’s degree in Music and Political Science. While attending Wooster, she met and later married the love of her life, Dr. John (Jack) H Wakeley of Bucyrus, Ohio in 1956. Both Sue and Jack were very active in the community, strong supporters of education and established scholarships at Western Carolina University in Psychology, The Arts and Track and Field. They both believed in investing in education and to “never stop learning”. Sue also volunteered with Meals On Wheels, Helping Hands, The Methodist Mission, and numerous other community organizations. She attended Cullowhee United Methodist church and considered the choir and church members to be her second family. Sue and Jack had a beautiful love story and a life full of adventures. Life was a celebration and meant to be enjoyed. She would tell her friends, though, that the best adventure was adopting all four of their children. She leaves behind a legacy of love and kindness, grace and fellowship. We are so blessed and honored that they chose us to be their children and that she is our Mother. She will live on in our hearts and we will cherish the memories we have of her and Dad. Sue is survived by her sister, Frances Reed Dalzell, of Ohio, her four children: Susan “Laina” Hamilton, Daniel Wakeley (Deb), Joel Wakeley (Carla), and Sara Taylor (Coleman). Her grandchildren are: Zachary Hamilton, Hannah Hamilton, Olivia Waldrop (Tyler), Tara Wakeley, Jeremy Galloway, Natasha Galloway, Kelsey Wakeley, Karlee Mosley (Morgan), Sarah Taylor, Lauren Gates (Brian), Ashley Taylor, Emily Taylor, and Kristen Taylor. She also was blessed with 7 great-grandchildren. Sue is preceded in death by her loving husband, Jack Wakeley, her parents Horace and Frances Reed, her brother John Reed (Margaret), son-in-law Dale Hamilton, Granddaughter Heidi Wakeley, and Great Grandson Gabriel Waldrop. A celebration of her life and love will be held at Cullowhee United Methodist Church on Saturday, June 12, 2021, at TBD. Donations can be made in lieu of flowers to Meals On Wheels of Jackson County NC @ The Dept of Aging, Jackson Co, 100 County Services Park, Sylva NC 28779 (828) 586-5494

Esther Sue (Reed) Wakeley, age 88, formerly of Cullowhee NC, passed away peacefully at home in Rockwall, Texas, surrounded by family on the evening of May 3rd, 2021. Sue was the youngest daughter of the late Dr. Horace Reed and Francis (Cooper)... View Obituary & Service Information

The family of Esther Sue (Reed) Wakeley created this Life Tributes page to make it easy to share your memories.