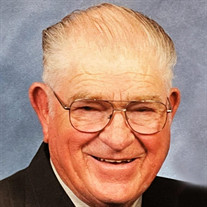 Elmo Jene Manley transferred from this life to his home in heaven to stand in victory before his Lord, Jesus Christ at 3:37 a.m. on Tuesday, May 18, 2021. He joined his wife of 73 ½ years, Louise Roach Manley, his daughter, Rhonda Schrimpsher, and his daughter, Celeste Bryant, his mother and father, Virgie Overton Manley and Willie Lee (Bill) Manley, his brother Leon Manley and sister, Virginia Darnell. He will be waiting on the other side for his son, Michael J Manley, and his wife, Fran; eight grandchildren, 21 great-grandchildren, and 4 great-great-grandchildren. He was born, raised, and had spent his entire adult life in Hollis, Oklahoma before moving to Rockwall, Texas in June 2016. Jene's first job was a newspaper route when he was about 12 years old. He went to downtown Hollis and talked some man into selling him a brand new bicycle and letting him pay it out. Then, he started paying it out with his paper route. Jene was a welder/machinist in Hollis, working early on at the Hollis Cotton Oil Mill. He worked in a couple of welding shops before becoming self-employed, then went back to Hollis Cotton Mill as Superintendent for 10 years. He continued after that into his eighties welding and working with his co-worker, Richard Gonzales. Many of the farmers and workers around Hollis called him, "Magic Jene" because he could almost always fix anything. He worked some 80 years, trying to retire a couple of times, but never could stay retired until moving to Rockwall. He did manage to spend some time traveling with Louise in their travel trailers built by him, and then in a motor home. They also toured on a motorcycle during a lot of that travel, thoroughly enjoying their time together. He rode the motorcycle until about age 84. He loved work and he loved worship. He attended First Baptist Church from the Sunday after he was born, his mother working in the nursery. Therefore, he attended FBC, Hollis 87 years before moving to Rockwall, but kept his membership there until now, being a member 82 years after trusting Christ as Savior was 10 years old. He taught elementary-aged "junior" boys Sunday School classes for several years and directed the Royal Ambassador program for several years, mentoring several young men in whose lives he made a huge difference. He sang in the choir for many years. He did not know how to read music, but he had a great voice and a good ear for music. He sang hymns virtually all of the time, day and night. He loved work and he loved worship. His life will be celebrated at First Baptist Church of Hollis, Oklahoma on Friday, May 21 at 2:00 p.m., with visitation 45 minutes before the Celebration Service. The service will be officiated by son, Michael J Manley, Glenn Alley, and Chris Carlisle. Pallbearers Noah Jason Schrimpsher, Grandson Brandon Bryant, Grandson Michael David Manley, Grandson Bradlee Lester, Great-grandson Richard Gonzales, Co-Worker/Dear Friend Kelly Faulks, Dear Friend Cade Faulks, Dear Friend Carson Faulks, Dear Friend Memorial donations can be made to the First Baptist Church in Hollis, OK. 201 E Jones St, Hollis, OK 73550 https://www.fbchollis.org

Elmo Jene Manley transferred from this life to his home in heaven to stand in victory before his Lord, Jesus Christ at 3:37 a.m. on Tuesday, May 18, 2021. He joined his wife of 73 ½ years, Louise Roach Manley, his daughter, Rhonda Schrimpsher,... View Obituary & Service Information

The family of Elmo Jene Manley created this Life Tributes page to make it easy to share your memories.

Elmo Jene Manley transferred from this life to his home in heaven...