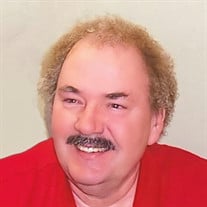 Earl “Roger” Vance, husband, father, grandfather, brother, uncle, and friend went to heaven too soon at age 75 due to complications from Covid. He was born and raised a cheesehead in Elm Grove, WI to Earl & Alice Vance. He was the only boy with three sisters: Judy, Karen, and Janet which is why he could braid hair and paint nails with the best of them. Legend has it, that’s where he walked to school five miles both ways uphill in the snow. Roger was a lover of the outdoors and an avid fisherman. As a teenager in college is where he hooked the catch of his life, Betsy. They traveled the world together for many years, piloting his twin-engine Cessna, riding his motorcycles, scuba diving, and rock climbing. So it wasn’t until much later in life when they embarked on his favorite adventure of being a dad to his children April and Matthew. He was a BIG, strong, loving man who always put his family first. His motto was to cherish the moment and nothing made him more proud than being dad to his children and grandpa to his grandchildren Luke and Elizabeth. Roger was the ultimate fan of his wife’s cooking, reading the newspaper every day, and being the first to wish all his nieces and nephews a happy birthday. He was a jack of all trades with a garage full of tools to prove it. He spent the early part of his career serving as a police officer. He later found his calling working in real estate making the most amazing friends along the way who he loved as family. Keeping family first and staying in touch with everyone was the embodiment of his life. Roger is survived by his loving wife of 47 years Betsy Vance, son Matthew Vance, daughter April Montemayor, his favorite son-in-law David, beautiful grandchildren Luke and Elizabeth, wonderful sisters Karen James, Janet Myers and husband Jerry; and a host of loving nieces, nephews, cousins, and friends. Please join us for a celebration of Roger’s life on Sunday, October 10, 2021, at 12:00 pm Reflections at Rest Haven Funeral Home-Rockwall Location 2500 Hwy 66 East, Rockwall, TX 75087. A reception will be held immediately following the service. For those who cannot attend the service, it will be live-streamed: www.oneroomstreaming.com Click on the icon "watch your service" enter Event ID: resthavenrockwall and password: RJKYFD

Earl &#8220;Roger&#8221; Vance, husband, father, grandfather, brother, uncle, and friend went to heaven too soon at age 75 due to complications from Covid. He was born and raised a cheesehead in Elm Grove, WI to Earl & Alice Vance. He was... View Obituary & Service Information

The family of Earl Roger Vance created this Life Tributes page to make it easy to share your memories.