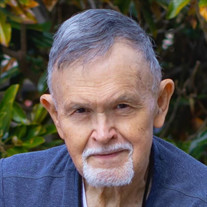 Donald Joe May, Sr., age 81, and long-time resident of Rockwall, TX, passed away on July 12, 2021. At times in his life, he was a mathematician, computer scientist, and farmer, but he was most proud of raising six sons. He was born May 3, 1940, in Roscoe, TX, to John Raymond May and Annette (Pittman) May. Donald grew up on the family farm in Scurry County, where he began driving a tractor as early as eight years old and took more responsibility for farming crops including cotton, and raising livestock as he grew older. He graduated from Hermleigh High School in Hermleigh, TX in 1958. During his high school years, he was a lineman on the football team. However, he contracted polio and recovered prior to his senior year. He attended Texas Tech University and graduated in 1962, where he majored in mathematics and minored in physics. Following graduate work at Texas Tech, Donald began his career as an engineer in missile technology at the White Sands Missile Range in Alamogordo, NM. He later moved to Greenville, TX, where he was an engineer for defense contractor LTV/E-Systems from 1966-72. During his time living in Greenville, Donald took classes at Texas A&M Commerce to learn computer programming. He relocated to Garland, TX in 1973 where he worked at another E-Systems office from 1973-1977 and from 1983-1995. He married Linda Helen Robertson in 1963, and the couple had three sons. Following a divorce, Donald married Linda Carol Ross in 1974, and the couple combined their families of three boys each for a total of six sons at home. From 1977-83, Donald became a farmer again when he and his family relocated back to Scurry County to manage the farm at his childhood home. During that time, he demonstrated hard work raising cotton to his sons who helped with chores and attended schools in nearby Snyder, TX. Donald was a devout Christian and was a Baptist. In 1990, he moved to Rockwall, where he attended First Baptist Church of Rockwall and was a member for more than 30 years. His presence will be deeply missed. He was also a member of other Baptist churches in Texas over the years including Ridgecrest Baptist Church in Greenville, First Baptist Church in Dallas, Orchard Hills Baptist Church in Garland, First Baptist Church in Snyder and Northlake Baptist Church in Garland. Donald is survived by his sons: Donald “Chip” May, Jr. and wife Amy, Jeffry May and wife Sandra, Robert May and wife Michelle, Ross Bawcum and wife Tiffany, Mark Bawcum and wife Theresa, and Richard Bawcum and wife Jennifer Thompson; 16 grandchildren and a host of great-grandchildren; sister: Ramona Huffman and husband Jimmy; and a host of nieces and nephews. He was preceded in death by his parents. A celebration of Donald’s life will be held 10:00 am Saturday, July 24, 2021, at First Baptist Church, 610 S. Goliad St., Rockwall, TX 75087, with Pastor Steve Swofford officiating.

Donald Joe May, Sr., age 81, and long-time resident of Rockwall, TX, passed away on July 12, 2021. At times in his life, he was a mathematician, computer scientist, and farmer, but he was most proud of raising six sons. He was born May 3, 1940,... View Obituary & Service Information

The family of Donald Joe May Sr. created this Life Tributes page to make it easy to share your memories.