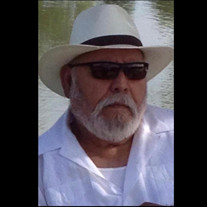 Daniel Aleman, Jr., age 78 of Garland, TX, for 50 years, passed away December 18, 2021. He was born December 13, 1943, in New Braunfels, TX, to Daniel Aleman Sr. and Solorro (Mani) Aleman. Daniel was a hard worker who enjoyed his career in welding up until his retirement, when he left work to care for his grandchildren and great-grandchildren. He was a loving husband, an awesome father, and a wonderful grandfather and great-grandfather who was lovingly known as “Welo” by his grandchildren. Daniel always supported his family. He was a man who always cared greatly and worried about others. Daniel was a great singer, and his family and friends enjoyed listening to him whenever they could. Daniel is survived by his beloved wife of 58 years: Elva Aleman; children: Mary Tucker, Daniel Aleman III and wife Mary, David Aleman, and Annette Rogers and husband James; grandchildren: Steven G. Diaz, Cecil Howard Harwell, Jr., John Harwell, Brittaney Gonzalez, Daniel Aleman IV, Victoria Aleman, Matthew Aleman, Lorenzo Aleman, Michael Aleman, Simon Aleman, Rudy Aleman, Kayla Rogers and Austin Rogers; 13 great-grandchildren; three brothers and six sisters. He was preceded in death by one daughter: Angie Harwell; his parents; one brother and one sister. A celebration of Daniel's life will be held at 10:00am, Friday, January 7, 2022, at Reflections at Rest Haven Funeral Home-Rockwall Location. Inurnment will follow in Rest Haven Memorial Park. A rosary service will be held Friday morning, prior to the celebration of life service, beginning at 9:00am.

The family of Daniel Aleman Jr. created this Life Tributes page to make it easy to share your memories.