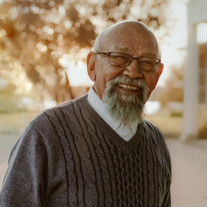 Clemente Reyna DeLeon, a loving and cherished husband, father, grandfather and friend, transitioned into eternity on Wednesday, September 1, 2021 in Rockwall, Texas. Clem was born in 1938 in Vanderbilt, Texas and was the third child born to Guillermo and Reyna DeLeon. Clem married the love of his life, Bessie, in 1960. They built a beautiful life together, devoted to the Lord, faithful in church and faithful to their family. Bessie meant the world to him, and he to her. They often fell asleep at night holding hands; they had a beautiful love that had no limits. As their 4 children grew and created families of their own, Clem continued to be a pillar in their family and community. He was everyones biggest cheerleader, an encourager, and always so positive. Clem was most happy when his family was together. He would often call the family together to for a Sunday BBQ (at which he would cook for everyone!) just so he could see everyone talking and enjoying each other’s company. He was happy when others were happy. Clem was known as “Woletho” to his Grandchildren. He was a devoted grandfather and loved deeply by each of his 9 Grandchildren and 4 Great-Grandchildren. He would often sneak them treats and chocolate, was known for running and playing with them, always showed up for every baseball game, school function, graduation, wedding, birthday, and any other event that he could show his support. He loved his Grandchildren with his whole heart. When anyone needed anything they would call Clem, and they knew he would offer help because he was a constant pulse of compassion. He was a dedicated, hard worker. Clem owned and operated a successful painting company for over 40 years, impacting many lives along the way. He offered employment to so many, made good friends with his clients, was a talented painter and businessman, and worked with integrity giving all Glory to God. He also enjoyed hunting with his son Ismo and their friends. He hunted until the final years of his life and would stop and share hunting stories with anyone who would listen. He loved to read, mostly the Bible, and learn more about the Lord everyday. He would turn up his worship music and dance around the loving room, giving thanks to all that the Lord had done for him. He would never say no to cake, was a lover of God’s word and all people, offered prayers to all, and smiled big for all photos. I think we can all learn something from our beloved friend and father, Clem. We would like to think he is resting in Heaven and taking it all in, but we know since he is healed and whole, and with his work ethic and love for learning, he is probably asking the angels so many questions, interceding in prayer for his family and friends, and dancing on streets of gold with his grandson, Jordan. Oh the smiles they must be sharing! Clem DeLeon was preceded in death by his father and mother, and his grandson Jordan Frakes. He leaves behind his precious wife Bessie DeLeon of sixty one years; His sons Clemente Jr. (Lisa) and Ismael (Joann), his daughters Lenora (Jeff) and Norma (Robbie). He also leaves behind his grandchildren: Chris (April), Victoria (Brandon), Elisabeth, Gabe (Mychal) Olivia, Jefferey, Abraham, Ruth; Great-Grandchildren: Jolie, Auni, Mason and Gage; and a host of family and friends. A visitation with family and friends will be held from 6:00 to 8:00pm on Thursday, September 9, 2021, at Rest Haven Funeral Home – Rowlett. The family will hold a private funeral service on Friday at 10:00am, followed by interment in Sacred Heart Cemetery. The service will be live streamed and can be viewed at www.oneroomstreaming.com. Click on "watch your service" and use Event ID: ResthavenRow and Password: XZA5KQ A Memorial Service will be held 3:00 pm on Sunday, September 12, 2021, at Church in the City, 6005 Dalrock Road, Rowlett 75088.

Clemente Reyna DeLeon, a loving and cherished husband, father, grandfather and friend, transitioned into eternity on Wednesday, September 1, 2021 in Rockwall, Texas. Clem was born in 1938 in Vanderbilt, Texas and was the third child born to... View Obituary & Service Information

The family of Clemente DeLeon created this Life Tributes page to make it easy to share your memories.