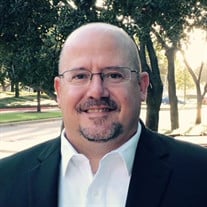 Christopher Edward Strong, 50, of Sachse, Texas entered his heavenly home February 5, 2022. Chris was born in Dallas, Texas January 20, 1972, to Johnny Edward Strong and Mary Nell (Auvenshine) Strong. He grew up in Rockwall, Texas, graduating from Rockwall High School in 1990. Chris received Christ at an early age and was a member of LakePointe Church in Rockwall, Texas. With his gregarious personality, Chris was loved by many, and he considered his friends part of his extended family. There were not many places he’d rather be than be surrounded by those he loved. He accepted others for who they were and with an unselfish heart. His proudest accomplishment in life was his wife and children whom he loved dearly. He would regularly talk about how amazed he was at how strong Tricia was, how sweet Haley was, how good-natured his son Coleton was, and how collected and patient Garrett was. Chris is survived by his loving wife Tricia Davis Strong, children: Haley Strong and fiancé Jacob Bueche, Coleton Strong, Garrett Strong; brother Michael Strong and mother Nell Strong. He is preceded in death by his father, Johnny Edward Strong. Memorial services will be held February 19, 2022, at 10:00 am at The Bridge, LakePointe Church, 701 E. I-30, Rockwall, Texas 75087. A Gathering to greet the family will be at 9:00am at The Bridge prior to the service. In lieu of flowers, the family would appreciate donations to your favorite charity in Chris’ name.

The family of Christopher Edward Strong created this Life Tributes page to make it easy to share your memories.