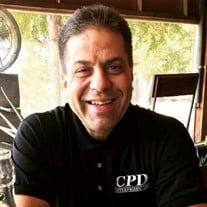 On May 22, 2021, Christopher Paul Leff passed away surrounded by family at age 55. He was born on March 15, 1966 to Steve and Loretta Leff in Waco, TX. He was the third oldest out of five children. He grew up in Garland, TX and graduated from North Garland High School in 1984 where he was a member of the debate team and a running back for North Garland Raider Football team. But if you ever asked him, he would say he graduated from the “School of Hard Knocks”. He married the love of his life, Sherri Leff on July 1, 1990 and they were able to celebrate 30 years together. They settled in Rowlett, TX where they raised their four children. Chris was Co-owner of a successful commercial flooring company (C.P.D Enterprises, Inc.) he founded with his wife in 1996. He was passionate about a lot of things that included detailing his cars, listening to “Second Date Update”, collecting classic miniature cars, competing for “Yard of the Month” in the neighborhood, and coaching his girls’ competitive softball teams but nothing compared to the love he had for his family. Chris was very well known for being a family man and putting others before himself. He took great pride in everything he did and taught his children that “whatever you do in this life, work as if someone is watching you and do it to the best of your ability”. He was passionate about working and it was rare to see him sitting still for long. Chris had a larger-than-life personality that could captivate anyone’s attention. From his sarcastic one-liners, hilarious life stories, and his genuine and thoughtful advice on life. He was lovingly called “Pops” by his three grandchildren who absolutely adored him and rarely heard the word “No”. He was well known for his strong opinions and was never afraid to communicate his stance on any subject. It is difficult to fully put into words who he was as a person to everyone that knew him. He was many things to many people and made a lasting impact on anyone who was fortunate enough to have crossed paths with him throughout his lifetime. The mold was broken after they made him. He was one of a kind and there will never be another one like him. He is preceded in death by his parents Steve and Loretta and brothers, Peter and Michael. He is survived by his wife, Sherri. His children: Jordan Leff, Megan Melendez and her husband Ruben, Morgan Leff, Christopher Leff “Lil Chris”, and Shelbi Walker. His grandchildren: Noah, Zoe, and Myles. His brother, David Leff and wife Kathleen; sister Candice Aigeltinger and husband Geoff. Nieces and nephews: Sean, Aaron, Anne, Gavin, Annelle, Casey, Melinda, Matt, Gracie, Logan, Emma, and Aly. Grandmother: Berta Uribe. Sisters/Brothers-in-law: Tammy Oliver, Wendy Batey, Tamme Leff, and Dave Socha. He is also leaving behind his loyal and dedicated CPD Enterprises, Inc. Family and countless number of friends. Funeral services will be held 3:00 pm Thursday, May 27, 2021, at Lakeshore Church in Rockwall. The family will gather with friends prior to the service beginning at 1:00 pm. There will be a visitation Wednesday evening from 6:00 to 8:00 pm at Rest Haven Funeral Home Rowlett.

On May 22, 2021, Christopher Paul Leff passed away surrounded by family at age 55. He was born on March 15, 1966 to Steve and Loretta Leff in Waco, TX. He was the third oldest out of five children. He grew up in Garland, TX and graduated from... View Obituary & Service Information

The family of Chris Leff created this Life Tributes page to make it easy to share your memories.