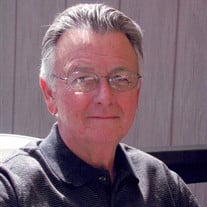 Charles “Don” Davis, 86, a seven-year resident of Rockwall, TX, passed from this life April 14, 2021. He was born November 7, 1934, in Waco, TX, to Charles E. and Lilla S. Davis. Don attended public schools in Waco and graduated from Waco High School in 1952. He attended Baylor University, graduated with an accounting degree in 1958, and later became a Certified Public Accountant. After graduation from Baylor he became an IRS Agent, a position he held for five years. He then became the Financial Controller for Pure Milk Company in Waco. In 1971, Don and two associates from Pure Milk Co, Jim Sample and Gene Parsons, both of Waco, purchased Gilt Edge Farms, Inc. in Norman, OK. The company processed and packaged milk and a full line of dairy products. The company had distribution branches throughout Oklahoma and parts of north and west Texas. Gene Parsons left the company in 1977 to pursue other business interests. In 1981, Jim Sample passed away. Don became President and CEO of the company, a position he held until 1984 when the company was sold to Dean Foods, a large national company that owned several dairy and food businesses. While in business his professional affiliations included being a board member of the Associated Milk Producers of Oklahoma, and serving two terms as President of that association. He served on the Board and the Executive Committee of Quality Chekd Dairy Products Association, an organization with numerous dairy companies throughout the United States and Canada. In Norman, he was an active member of First Christian Church of Norman, serving as Deacon and Elder. His community affiliations included board member of the Norman Regional Hospital, board member for the Norman School Foundation and board member of the Salvation Army. After retirement Don and Claudia lived in Poway, CA, again in Norman and Grand Lake, OK, Phoenix and Pinetop, AZ, Austin, North Richland Hills, and FINALLY, Heath, TX. In his spare time, Don was an avid tennis player and golfer. Don is survived by his loving wife of 43 years: Claudia Sue (Hughes) Davis; children: Randy Davis, Christopher Don Davis, Donna Gingras, Susan Denise Davis, Jacob Wade Tindall and wife Janna, and Debbie Steele and husband Steve; grandchildren: Megan Kihm and husband Josh, Ali Steele, Hannah Steele, Preston Maxwell, Braden Tindall, Briella Antenorcruz and Tori Davis; great-grandson: Caden Kihm; sister: Gayle Roark; and a host of nieces, nephews and cousins, who will all miss Don dearly. Funeral services will be held 10:00am, Wednesday, April 21, 2021, at Reflections at Rest Haven Funeral Home – Rockwall location. The family will receive friends and loved ones Wednesday at the funeral home, prior to the service, beginning at 9:00am. Following our celebration of his life, Don will be laid to rest in Rest Haven Memorial Park. The service will also be live streamed; please go to www.oneroomstreaming.com and click on the "watch your service" icon and use Event ID: resthavenrockwall and password: ZDSEXA In lieu of flowers, memorial contributions may be made to the American Heart Association at https://www.heart.org/

The family of Charles "Don" Davis created this Life Tributes page to make it easy to share your memories.