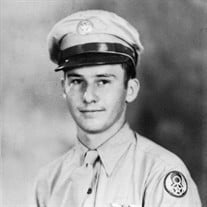 Life Lived in Service: C.B. Perdue, Jr. Cawthon Bailey Perdue, Jr., almost lost his life at the ripe old age of 20, half a world away, defending freedom in the greatest war the world had ever seen. On April 7, 1945, he survived a battle many... View Obituary & Service Information