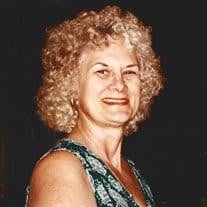 Carole Annette Faraizl, age 79 of Garland, TX, passed away February 17, 2022. She was born March 29, 1942, in Dallas to George William Nemec, Sr. and Carolyn Theresa (Mahdak) Nemec. Carole attended Holy Trinity Grade School, Ursuline Academy High School, and Draughon’s Business College in Dallas. She married Raymond Richard Faraizl, Sr., December 29, 1962, in Dallas, and they moved to Garland in 1967 where they remained on Montclair Drive until present. Beginning in the early 1960s, Carole worked in many jobs mostly in Dallas, retiring in August 2000 as legal secretary officed in Expressway Tower in Dallas. Her retirement years were spent documenting the times she shared with her husband and four children. Carol loved her family and was involved in their many activities, including traveling internationally, visiting museums, eating at her favorite restaurants, and attending many athletic events. She was a faithful member of Good Shepherd Catholic Church. She touched the lives of many people through the years and her presence will be deeply missed. Carole is survived by her husband of 59 years: Raymond Faraizl of Garland, TX; sons: Ray Faraizl Jr. of Dallas, TX, and Adam Faraizl of Seattle, WA; daughters: Renee Oberle and husband David of Forney, TX, and Mandy Faraizl of Dallas, TX; siblings: George Nemec Jr. of Irving, TX, Margaret Holub of Mesquite, TX, Ed Nemec and wife Krissi of Fruitvale, TX, and Liz Opiela and husband Roger of Jefferson, TX; two grandchildren, David Oberle & wife Brianna of Forney, TX and Nicole Oberle of San Marcos, TX; one great-grandchild Rupert Oberle; several nieces, nephews, and extended family. She was preceded in death by her parents, and grandparents: John and Frances Mahdak, and Charles and Frances Nemec. There will be a Visitation at Rest Haven Funeral Home – Rowlett location Sunday February 27, 2022, from 4:00 to 7:00 p.m. with a Rosary at 6:00 p.m. Funeral services will be held Monday, February 28, 2022, at 9:00 a.m. at Good Shepherd Catholic Church in Garland. Interment will follow in Sacred Heart Cemetery in Rowlett. In lieu of flowers, memorials can be made to the Texas Czech Heritage and Cultural Center in La Grange, Texas, the Texas Czech Genealogical Society in Temple, Texas or to a charity of your choice in Carole’s honor.

The family of Carole Annette Faraizl created this Life Tributes page to make it easy to share your memories.