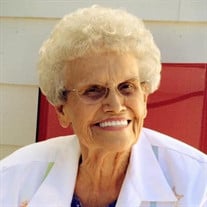 Bonnie Mae Loynd Booze-Clark was born July 31, 1933, in Rigby, ID, to Bertha Palmer Blodgett and John Leonard Loynd. Her given name was Claretta, but the family legally changed it later. She was the eldest of four children. As a young girl, she mistakenly thought she could fly, and jumped off the roof straight into some garbage cans. Thankfully, she lived through that, as well as a serious bout of scarlet fever. In her late teens, Bonnie worked summers at Yellowstone National Park and volunteered as a candy striper at LDS Hospital. Later she worked her way through school with a job at that hospital, became a licensed practical nurse (LPN), and graduated from LDS Business College. One night Bonnie went out with her girlfriends and providentially met Fred Lomax Booze of Springwood, VA, (a Navy man stationed in Idaho). Bonnie’s mother called Fred “a long, tall drink of water” and he changed her life. They married in Ely, NV, (even though Fred forgot his shoes), and they spent the next several years moving their family wherever the US Navy sent them: first to Vallejo, CA, then San Francisco, CA. Later they moved to Hampton, VA, then to favorite Charleston, SC, and north again to Virginia Beach, VA. Bonnie enjoyed being a military wife and mother of four, even when Fred was deployed on submarine duty for months at a time. In 1969, Fred retired from the Navy and the family relocated to Texas, where they have been anchored ever since. After her youngest child started elementary school, Bonnie took a job as a bank teller and worked there for several years. She later worked as a legal secretary for local attorney Leon Smith until he retired. Her last job, from which she retired in 1995, was as appointment secretary at the LDS Dallas Texas Temple. As a recent widow and retiree, she began traveling and enjoyed trips all over the US (Hawaii was a favorite) and to other countries, including Mexico, Guatemala, Scandinavia, and the Baltic. On one of her many trips home to Idaho, she reconnected with school friend Lewis Max Clark. They enjoyed a whirlwind courtship and married in 2002. Bonnie and Max were blessed to find each other and enjoyed almost 20 years together, traveling often between their homes in Texas and Idaho. Max had rarely left Idaho before marrying Bonnie, but since then she’s taken him on many adventures across the US and even outside the country, to Panama, Costa Rica, Aruba, Curaçao, and Colombia. Bonnie loved bluebonnets, the color purple, and Elvis. She collected spoons from all over the world – many thanks to all those who gifted her one when they traveled! She was an avid genealogist and served as President of the Rockwall County Genealogical Society. She was good at pinochle and crochet, and she took in many strays before animal rescue was an official thing. Her beloved dog, Cricket, was her constant companion for many years. Bonnie was always color-coordinated and enjoyed buying new outfits, cute shoes, and fancy jewelry. She would not be seen without her hair done and a good manicure. Bonnie has made dozens of beautiful quilts that her family and friends will enjoy for decades, and though we complained too often when she pulled out her camera, we will also cherish the many pictures she took. Bonnie was born during the Great Depression and was a child of World War II. She experienced the Cold War as a military wife, then lived through 9-11 and the COVID pandemic. In May, she enjoyed Mother’s Day with all her kids and last week, she made it a point to see her beloved Yellowstone Park. Bonnie’s last meal was a milkshake and when she died, her nails were fabulously done in red, white, and blue. She was one feisty lady with a million-dollar smile, and we will miss her. Bonnie left this world early in the morning on Friday July 2, 2021, after a brief illness and a heart attack. She was preceded in death by her parents, her brother, LaVar Loynd, and husband, Fred. Bonnie’s greatest pride was her family. She is survived by her four children: Shirlee Booze Stewart Chaillet (Brian), Jeanetta Booze Daniel McFee (John), Rodney Booze (Amy), and Tamela Booze Terry (Mark); her ten grandchildren: Erica Stewart Merrill (Danny Cracchiolo), Cameron Stewart (Toni), Peyton Stewart Freeman (Max), Christopher Daniel (Jennifer), Thomas Daniel (Lindsey), Reagan Booze, Ryan Booze, Rachael Booze, Haile Terry, and Jensen Terry; her five great-grandchildren: Sterling, Remington, Lark, Tess, and Gwen; and two step-great-grandchildren: Brandon and Tyler. Bonnie is also survived by her loving sisters: Beverley Tracy and Dorothy Franck; her devoted husband: Max Clark; his three children: Jeff (Dee), Kristy (Tyson), and Bryan (Susan); six Clark grandchildren; and eleven Clark great-grandchildren. Visitation in Idaho will be July 5, 2021, from 12:00pm to 6:00pm at Eckersell Funeral Home at 101 W Main St, Rigby, ID. Condolences may be expressed at https://www.resthavenfuneral.com/ or https://www.eckersellfuneralhome.com/. Texas funeral services will be held at 3:00 pm Saturday, July 10, 2021, at the Church of Jesus Christ Latter-day Saints, 6819 S Farm To market 549, Heath, TX 75032. Interment will follow in Rest Haven Memorial Park. A gathering of friends and family will take place at the church prior to the service beginning at 2:00pm.

Bonnie Mae Loynd Booze-Clark was born July 31, 1933, in Rigby, ID, to Bertha Palmer Blodgett and John Leonard Loynd. Her given name was Claretta, but the family legally changed it later. She was the eldest of four children. As a young girl,... View Obituary & Service Information

The family of Bonnie Mae Loynd Booze-Clark created this Life Tributes page to make it easy to share your memories.