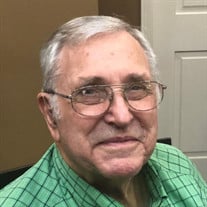 Bill Hood, age 93, of Mesquite, TX, passed away on October 25, 2021. He was born March 18, 1928, in Plainview, TX, to Shelby R. Hood and Lena Orean Meredith. Bill served his country in the United States Navy as an Electronics Technician near the end of World War II. After leaving the Navy, Bill attended college at Texas Tech University, earning a degree in Electrical Engineering. While attending Texas Tech, he met and married his lifelong sweetheart Esta Marjorie Mullican. Upon completion of his degree, he went to work for Southwestern Bell Telephone where he pursued a career in engineering for over 30 years. While working for the telephone company, Bill earned a master’s degree in Business and Human Relations along with his MBA from ACU Dallas (now Amberton University). After retiring from Southwestern Bell, he worked for two years at Ericsson Communications while also teaching computer science at Cedar Valley Community College. In 2012, Bill was invited to participate in the WWII Veteran’s Honor Fight to the nation’s capital. Alongside other veterans, he was honored and celebrated for his service during WWII. Bill was a faithful Christian man who loved the Lord. He was known for his sincerity, compassion, and witty sense of humor. He believed in personal accountability and always maintained a strong work ethic. As the patriarch of his family, Bill was known as “Honey”, “Daddy”, “Grandad” and “GGDaddy”. He will be deeply missed. Bill is survived by his loving wife of 69 ½ years: Marge Hood; son, Kregg Hood and wife Karen; daughter, Keri Reynolds and husband Mike; grandchildren: Heather Reynolds, Kalah Thompson and husband John, Nicole Crawford and husband Kris, Kyle Hood and wife Laura; great-grandchildren: Zechariah, Audrey, Lydia, Jonathan, and Malachi; sister, Sue Fortune and sister-in-law, Sandra Hood and a host of nieces and nephews. He was preceded in death by his brothers: Raymond Hood and C.L. Hood; his sister, Betty Pitzer; and his parents. A tribute to Bill’s life will be held at 2:00 pm Saturday, November 13, 2021, at Christian Care Church of Christ, 1000 Wiggins Pkwy, Mesquite, TX 75150, officiated by Ray Hunter minister of the Christian Care Center Church of Christ. Memorial gifts can be made in Bill’s honor to: Coventry Reserve, Christian Care Communities, Convoy of Hope, and In His Image International.

Bill Hood, age 93, of Mesquite, TX, passed away on October 25, 2021. He was born March 18, 1928, in Plainview, TX, to Shelby R. Hood and Lena Orean Meredith. Bill served his country in the United States Navy as an Electronics Technician near... View Obituary & Service Information

The family of Bill Hood created this Life Tributes page to make it easy to share your memories.