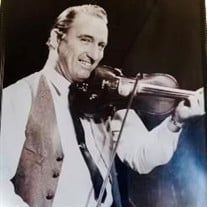 Benjamin “Ben” Franklin McCay III, age 88, of Garland, TX, passed away June 1, 2021, in California, while residing with his son Ricky for the last four years. He was born February 8, 1933, in Cameron, TX, to Benjamin Franklin McCay II and Thelma (Green) McCay. Ben will join his late wife, Gwendolyn (Terry) McCay, his late son, Steven Lee McCay, and late grandson, Russell Lee McCay. Ben spent his professional career in many different industries, including the oil industry (rig-drilling), the manufacturing of electric heating elements, and mobile home plumbing sales. At various times he was a pawn and loan officer, a life insurance agent, a security guard, and at one point in his life a musician. Ben expanded his skill-set in the workforce. He had a passion for playing the fiddle and belonged to a small-town traveling band. His talent was undoubtedly recognizable. Playing one night at the Ramada Inn located in San Jacinto, CA, Merle Haggard (passing through town) was present and took stage to join in, singing and playing the guitar a bit. At the end of the night, Merle, impressed by Ben’s fiddle playing skills, invited him to join his band. What an opportunity and compliment! Unfortunately, the “Mrs.” said “no!” and because of his commitment to being a family man first, she won. Ben was not only musically talented, but also had a knack for acting. When he was a young boy, he auditioned for the role of Alfalfa in The Little Rascals film. He landed the role, but was unfortunately told “no,” by his mother. Anyone that knew Ben understood that he loved reading the morning newspaper and eating his Hungryman Jack T.V. dinners. He was a man that “lived by the watch.” He lived like “clock-work” and had a punctual personality by nature. His presence will be deeply missed by everyone who knew and loved him. Ben is survived by his three loving children: his thoughtful sons Ricky (1st born) and Benny (2nd born), and his only daughter, Debbie (last born); two beautiful daughters-in-law: Becky (wife of Benny) and Shannon (wife of late son, Steve); 10 grandchildren: Trish, Brandon, Di-Anna, Chris, Sean, Benny-Dean, Bryan, Richard, Danielle and Sarah; and over 20 great-grandchildren. Funeral services will be held at 1:00pm, Saturday July 3, 2021, at Reflections at Rest Haven Funeral Home-Rockwall Location. Interment will follow in Rest Haven Memorial Park. A gathering of family and friends will be held Friday evening at The Gathering at Rest Haven Funeral Home-Rockwall Location from 6:00 to 8:00pm.

The family of Benjamin "Ben" Franklin McCay III created this Life Tributes page to make it easy to share your memories.