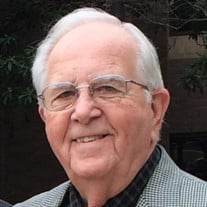 Dr. Aubrey Q. Patterson, age 88, of Rockwall, TX, went to be with the Lord on December 23, 2021. He was born September 23, 1933, in Lenoir, NC, to Aubrey Tase Patterson and Oleta Gaye (Query) Patterson. His presence will be deeply missed. Aubrey is survived by his children: Tim and Janet Patterson, Barry Patterson and Greg Raynes, Sheron and Stuart Tolle, and Kristi and Dan Routen; and grandchildren: Matthew and Lyndsey Patterson, Jake Patterson and fiancee Katalina Benecke, Emily Tolle, Libby Tolle and Evan Tolle, Conner Routen, and Carson Routen. He was preceded in death by his wife of 68 years: Yvonne Patterson. Aubrey grew up in Charlotte NC, attended Harding High School. After he graduated Campbell College he began his ministry career at Stony Hill Baptist Church in Wake Forest, NC while attending the Southeastern Baptist Theological Seminary. He also received an Honorary Doctorate of Divinity Degree from Dallas Baptist University. Aubrey served as pastor for several churches in Raleigh and Charlotte NC before accepting God's call as Pastor of Highland Baptist Church in Dallas, TX in 1975. He also served at First Baptist Church Oak Cliff, was Director of Church and Mission Development with the Dallas Baptist Association and served on the staff of LakePointe Church in Rockwall, TX. After retiring from church ministry he worked as Chaplain for Rest Haven Funeral Home in Rockwall. Aubrey touched the lives of thousands of people during his service to the Lord. In addition to serving churches and their members, he helped many churches and church missions get started during his time at the Dallas Baptist Association. He performed the weddings and funerals for hundreds of people. He had a great gift of counseling to those who had lost loved ones. His seven grandchildren were his and Yvonne's greatest joy. They were a constant presence at ballgames, recitals, plays and graduations. Funeral services will be held 2:00 pm Tuesday, January 4, 2022, at Reflections at Rest Haven Funeral Home- Rockwall Location officiated by Dr. Herb Pedersen. Interment will follow in Rest Haven Memorial Park. A gathering of family and friends will take place prior to the service beginning at 12:00 pm. The service will also be live-streamed. https://view.oneroomstreaming.com/authorise.php?k=1640658544155994

Dr. Aubrey Q. Patterson, age 88, of Rockwall, TX, went to be with the Lord on December 23, 2021. He was born September 23, 1933, in Lenoir, NC, to Aubrey Tase Patterson and Oleta Gaye (Query) Patterson. His presence will be deeply missed. Aubrey... View Obituary & Service Information

The family of Aubrey Patterson created this Life Tributes page to make it easy to share your memories.