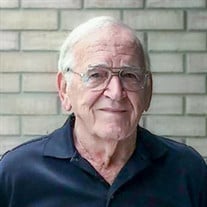 After 93 years of a life well lived, this North Dakota farm boy left us on November 21, 2021. Surrounded by his family, who loved him dearly, Art Sprecher died and left a wealth of memories we will never forget. His heritage of being the... View Obituary & Service Information

The family of Arthur Fredrick Sprecher created this Life Tributes page to make it easy to share your memories.

After 93 years of a life well lived, this North Dakota farm boy...