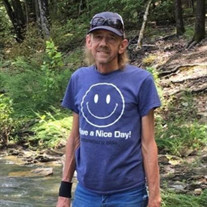 Andy Patton Williams, 64, of Caddo Mills, Texas, passed from this life to be with Jesus on August 29, 2021. Andy was born December 4, 1956, in Jacksonville, Florida, to Richard Oliver Williams and Barbara Ann (Smith) Williams, the middle of three children. In 1960, the family moved to Mesquite, Texas, where Andy then attended Motley Elementary and Vanston Middle School. Andy was a member of the drum line in the Big Blue marching band at North Mesquite High School and graduated from North Mesquite in 1975. Soon after graduation, he began working for J & S Craftmasters as a painter and foreman. In 1980, Andy married Naomi Lavelle Barber in Mesquite, Texas. Andy had Michelle and Naomi had Lori and together they became the Williams family. Andy was self-employed as a painter, carpenter, and jack of all trades since the late 90’s. Andy and Naomi moved to Caddo Mills, TX, in 1997. Andy was an active member of HillTop Church in Dallas. Andy is survived by his loving wife: Naomi; their two daughters: Kristin Michelle Cornwell and her husband Wally, and Lori Gilbreath and her husband Josh. He is also survived by five grandchildren, who know him as “Thor”: McKenna Grace Cornwell or as Andy called her “Butterfly”, Grant Gilbreath, Owen Patton Cornwell, Henry Gilbreath, and Evelyn Gilbreath or as Andy liked to call her “Little Bird”; brother: Buddy Williams and his wife Toni; sisters-in-law: Sharon Williams, Martha Ridenour and her husband Earl, and Sarah Hatcher and her husband Eddie; along with a host of aunts, uncles, nieces, nephews, cousins, grand-nieces and grand-nephews. Andy was preceded in death by his parents; brother: Richard; sister-in-law: Rachel Barber Myers; and brothers-in-law: Alvie Barber and Olen Barber. Andy impacted many people in his own special way over the years. He loved making people smile with a funny joke, a thoughtful note, or helping someone however he could. He was talented as a carpenter, drummer, and artist. He made his girls beautiful Christmas ornaments every year and gave countless beautiful, wooden creations to numerous family members and friends. Andy loved BIG and had a selfless heart. His favorite things were woodworking, going thrifting, fishing, playing drums, listening to classic rock and worship music, and his animals. He loved hunting for bigfoot, zombies, snakes, and spiders in his creek with his grandkids and spending time with Naomi and the family. He will be greatly missed. A celebration of Andy’s life will be held on Saturday, September 11, 2021, at 11:00 AM, at HillTop Church, 7912 Antoinette Street, Dallas, TX 75217, with Pastor Lonnie Sawyer officiating. For those wishing to honor Andy, in lieu of flowers, the family asks you to consider making a donation to Care Center Ministries, through HillTop Church: https://www.carecenterministries.org and follow the links for donation. Care Center Ministries was the beginning of a healing for Andy and his family.

Andy Patton Williams, 64, of Caddo Mills, Texas, passed from this life to be with Jesus on August 29, 2021. Andy was born December 4, 1956, in Jacksonville, Florida, to Richard Oliver Williams and Barbara Ann (Smith) Williams, the middle of... View Obituary & Service Information

The family of Andy Patton Williams created this Life Tributes page to make it easy to share your memories.