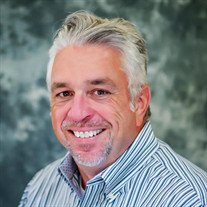 Andrew “Andy” Paul Morrow, 56, of Rockwall, TX, passed from this life September 1, 2021. He was born May 2, 1965, in Ottawa, Canada, to Robert Douglas Morrow and Patricia Agnes (née Burns) Binder. Andy had a big heart, and the stature and personality to match! He was a loving husband, father, son, brother, uncle, co-worker and friend. He loved life and enjoyed people. Andy had a never-ending love for his sons, providing them with every opportunity possible to explore their capabilities and horizons. He supported any activity they chose, and was always their biggest cheerleader and fan. Many knew Andy from different facets of life. He was a manager, husband, father and friend to many—sometimes playing more than one role at once. He was born into a military family and lived on a number of bases across Canada, including in Ottawa, where he attended Sir Wilfred Laurier High School and was a graduate of the class of 1984. Andy loved sports, having played basketball, hockey, and rugby throughout his youth. In fact, he loved sports so much, he even volunteered to be the coach for his high school girls’ volleyball team, a job about which he was very enthusiastic! Andy attended the University of Waterloo (ON), where he earned a Bachelor of Mathematics with a major in Computer Science. His mathematical prowess was renowned, making him the go-to tutor on his residence floor. This was how he met his future wife, Niki, who - by her own admission - would not have passed first year calculus without his help. During his time as a co-op student in Waterloo, (ON) Andy worked for Canada Post Corporation and Nortel Networks. Upon graduation, he began working at Nortel Networks in Ottawa as a telecommunication engineer, and rose to become an Executive Director for business development. During his time at Nortel, Andy worked for the Netherlands Phone company, where he and Niki enjoyed many adventures exploring Europe. Andy and Niki were married June 2, 1990, in a small chapel in Niki’s hometown of Cumberland (ON). They were blessed with the birth of two sons, Barrett in 1995 and Jakob in 1999. Shortly thereafter, Andy and his family moved to San Antonio, TX, where he was in telecom equipment sales for Nortel, selling to ATT. He eventually joined ATT, where he rose to be an Assistant Vice President, and later left to become a VP of Sales at Mavenir. Andy’s most important role in life was being a loving and devoted husband and father - most of all, his passion was caring and providing for his family. He would quite literally give them the shirt off his back, and sometimes did! It is because of Andy’s big personality that the Morrow family was often referred to as the “fun” family amongst his in-laws. He was also considered the “fun” uncle by his many nieces and nephews. It was even suggested by many in-laws that the Morrow family could’ve starred in their own TV reality show. Andy was the life of the party, providing bellowing laughs with his unique brand of humor. He always joked that if he could do it all over, he would’ve become a stand-up comedian. Andy will be deeply grieved and missed by all who loved him. We know he is playing a round of golf with his dad and enjoying a vodka-cranberry at the 19th hole. May he rest in peace and laughter and continue to watch over us. Andy is survived by his loving wife of 31 years: Nicolle May Barrett; sons: Barrett Morrow, and Jakob Morrow and partner Thisbeth Salazar; mother: Pat Binder; brother: Robert Morrow and wife Kate Holmes; nephew: Harry Morrow; mother and father-in-law: Roma and Cecil Barrett; siblings-in-law: Reg Barrett and wife Eleanor, Susan Barrett and husband Dean Egan, and Jamie Barrett and wife Lisa; nieces-in-law: Emily Lau and husband Patrick, Leah Egan and Adelaide Egan; nephew-in-law: Ian Barrett and wife Katrina; great-niece: Arwen; and great-nephews: William and Emmett. Andy was preceded in death by his father: Robert Morrow. Funeral services will be held at 1:00pm, Wednesday, September 8, 2021, at Reflections at Rest Haven Funeral Home-Rockwall Location. A reception will immediately follow the service at 1036 Kingsbridge Ln., Rockwall, TX 75032 (Gate Code: #2750). A gathering of family and friends will be held Tuesday evening at the funeral home from 5:00 to 8:00pm. Those wishing to honor Andy’s life and his commitment to promoting mental wellness may donate to the Inpatient Psychiatry Unit at Children’s Health Dallas at Children's Medical Center Foundation, PO Box 847253, Dallas, TX 75284. Donations may also be made at https://give.childrens.com/ The service will also be live streamed; please go to www.oneroomstreaming.com and click on "watch your service" icon and use Event ID: resthavenrockwall and password: BY5E4E

The family of Andrew "Andy" Paul Morrow created this Life Tributes page to make it easy to share your memories.