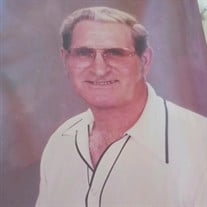 Alvin Lamont Wenzel, 95, of Garland, Texas, passed from this life on March 27, 2022. Alvin was born on March 11, 1927, to Elmer A. Wenzel and Flossie (Sparling) Wenzel, in Warren, Pennsylvania. Alvin (Al) Lamont Wenzel was an outdoors man at heart. He loved being outside fishing, camping, barbecuing, mowing, or anything else he could find to do. He liked to take a hands on approach to everything in life. He was a man that was willing to give a helping hand when someone needed it. He had a passion for truck driving,and the diners that he would find along the way. It didn't matter if it was across the country or across town.His most favorite place to be was with his wife Dorthy. On March 27,2022 he was called home to reunite with his wife forever. Alvin is survived by his children: Judy Crutsinger, Danny Reed and wife Pat, Louis Wenzel, Lamont “Monty” Wenzel and wife Coleen, Calvin Wenzel and wife MJ, Fred Wenzel and wife Peggy; grandchildren: Jill, Richard, Kimberly, Misty, Adam, Eric, Corrina, Dawn, Mike, Chris, Julie, Matt, Spencer and Shannon; great-grandchildren: Aubree, Justin, Donald, Anthony, Brianna, Alexia, Gisselle, Braydenn, Dayne, Joshua, Zachary, Rebekah, Bekah, Lani, Niklas, Garrett, and Tim; and great great-grandchildren: Calvin and Avery. Alvin is preceded in death by his loving wife, Dorothy Wenzel; son: Marvin Wenzel; and son-in-law: Donald Jack Crutsinger. A funeral service to celebrate Alvin is to be held on Wednesday, April 6, 2022, beginning at 10:00 AM in Reflections Chapel at Rest Haven Funeral Home – Rockwall location, with Pastor Paul Ferguson officiating. Burial will follow the ceremony in Rest Haven Memorial Park. The family will also receive friends and loved ones for a gathering beginning at 9:00 AM on Wednesday, prior to the service. For those who may not be able to attend, the services will be livestreamed at the following link: https://view.oneroomstreaming.com/authorise.php?k=1648677112175680

Alvin Lamont Wenzel, 95, of Garland, Texas, passed from this life on March 27, 2022. Alvin was born on March 11, 1927, to Elmer A. Wenzel and Flossie (Sparling) Wenzel, in Warren, Pennsylvania. Alvin (Al) Lamont Wenzel was an outdoors man... View Obituary & Service Information

The family of Alvin "Al" Lamont Wenzel created this Life Tributes page to make it easy to share your memories.

Alvin Lamont Wenzel, 95, of Garland, Texas, passed from this...