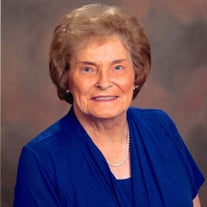 Adele H. Schreiber (nee Brandt), 86, of Rockwall, Texas, beloved wife, mother, grandmother and great-grandmother, passed away on October 28, 2021, after a yearlong battle with cancer. Born in Valmeyer, Illinois, on November 27, 1934, Adele spent her early years in Waterloo, Illinois. Within days of marrying Charles G.(Chuck) Schreiber on October 30, 1954, they embarked on a thirty-year journey in the Air Force, living various lengths of time in Texas, Florida, South Carolina, Massachusetts, Japan, Okinawa, California, Nebraska, Alabama, Arizona, Virginia, Belgium, and finally finishing back in Virginia. They moved to Rockwall Texas in 1998, shortly after retiring. Chuck and Adele shared sixty-seven devoted years of marriage prior to her passing. Adele took pride in her role as the wife of an Air Force officer and loving, stay at home mother to her four daughters. After raising her family, Adele returned to work as an executive assistant in the hospitality industry. In Rockwall, she was honored to serve her community for several years as a member of the county tax Appraisal Review Board. An avid golfer with a quick wit and infectious laugh, Adele also enjoyed traveling on many golfing vacations and being involved in social activities at their home in The Shores golfing community. Her warm and spontaneous personality and unfailing good humor remained with her to the end. Adele will be greatly missed by her family and friends. In addition to Chuck, Adele is survived by her daughters, Debra (Richard) Lindsay; Sandra (Michael) Maurizio; Bonnie (Steven) Letts; Pamela (Matt) Mumper; her six grandchildren, five great-grandchildren and her brother Ronald (Carole) Brandt. Adele was preceded in death by her father, Oliver Brandt, her mother, Esther Brandt (nee Heusohn), and her brothers Norman, Alois, and Paul. Visitation will be held on Monday, November 8, 2021, from 5:00 PM to 8:00 PM, at Rest Haven Funeral Home – Rockwall location, with live streaming available at: https://view.oneroomstreaming.com/authorise.php?k=1635543672145399 In lieu of flowers, please make donations in memory of Adele to Rockwall County Helping Hands at https://rockwallhelpinghands.com

The family of Adele Henrietta Schreiber created this Life Tributes page to make it easy to share your memories.